This has appeared at the foot of a French webpage dedicated to Robert Wyatt:

A rough translation via Google yields:

“And for those who wish to exhaust the mysteries of the Jerusalem of our favorite music, we strongly recommend reading Matthew Watkins’ book You Are Here: The biography of a moment . A kaleidoscopic exploration of what Michel Butor called Le Génie du Lieu [the genius loci], expanding Canterbury, from Big Bang to August 15, 2014 – center of the world and mother of the most intoxicating sound arrangements that humanity has produced since its inception – Canterbury, here, yesterday, now and forever …”

Bernard Sharratt, author of Reading Relations (1982) and The Literary Labyrinth (1984) and Honorary Senior Research Fellow in the School of English, University of Kent had this to say:

“Readers of Joyce’s Portrait undoubtedly recognise themselves in Stephen Dedalus inscribing his name within an ever-expanding geography of Ireland, the world, the universe. Matthew Watkins has taken that schoolboy scribble to a whole new dimension and reversed the zoom lens, since he begins his book graphically with the cosmic Big Bang and then advances by carefully measured and diminishing steps in both time and space right down, almost, to the Planck unit, the smallest conceivable spatial area, which, by an orchestrated combination of historical trajectories, personal autobiography, and random chance, is an almost asymptotic spot in that ancient target of pilgrimage and tourism, Canterbury, and at an almost frozen minimal moment on a very specific date, 15th August 2014.

Along the way he has assembled an instructively entertaining array of detailed historical data about the city, gradually culminating in personal reminiscences of the counter-cultural music scene that once enlivened the place. It’s an intriguing and original structure that makes for a wonderfully compulsive read, even for those who don’t know Canterbury, since — like Stephen’s gesture — it beckons every one of us towards a shared sense of amazement at the deeply odd scope of the spatio-temporal world we actually inhabit.

Next time you consult a tourist map and read ‘You Are Here’, with a large arrow allegedly locating your position, don’t just casually believe it. As Watkins’s extraordinary and highly readable work alerts us, the world — for every one of us — is much more curiously mysterious and potentially exhilarating than we used to think. The ever-inquisitive Leopold Bloom would most certainly have relished this book.”

“a splendid antidote to the so-called new nature writing, and proof of the epic potential of ‘local’ studies.”

He also shared a couple of lovely anecdotes from his time as a student in Canterbury: seeing Steve Hillage fishing in the Stour by St. Radigunds Bridge while practicing guitar, and helping Martin Cockerham of Spirogyra stickering streetsigns to promote their (now cult classic) album Bells, Boots and Shambles.

I got hold of this remarkable book at the Canterbury Sound event back in October (as well as meeting its author, Matt Watkins). Having finally had chance to sit down and read through You Are Here I should say that it’s every bit as mind-blowing and informative as I had hoped.

You are Here is essentially a study of Canterbury from the year dot to a specified date and time in August 2014. True to his mathematical roots, Matt constructs a perfect spiral timeline (the book’s byline is  ‘an accelerated history’), with two page segments being devoted to each time frame. Initially this means that the timeframes are large (the first being 14 thousand billion to 11 thousand billion BC), but then incrementally shrink (e.g. 1109 to 1292 in medieval times, 1867–1897 in the 19th century), to segments of hours, then minutes, then seconds as the book reaches its rather frenzied conclusion.

What this means for the reader is that what starts out as essentially a superb historical document from the Roman era forward, setting out the premise for Canterbury being a totally critical centrepoint for religious and political machinations within England, inevitably becomes something else, as time ‘speeds up’ . From a purely ‘sceneist’ point of view, the segment of time devoted to seminal Canterbury musical activity, let’s say between 1960 and 1972, is condensed to a mere 3 pages. The accelerating nature of the timeframes means that roughly half of the book is devoted to Canterbury in the new millennium, which by extension means that it’s an autobiographical account of life in the city. Matt’s own personal interests and perspectives become relevant here. There’s a fair amount of commentary, or at least noting, of counter-culture,  streetlife, local politics, corporate machinations, and their impact on the local environment, alongside the prevailing themes of history and religion, and in that regard the latter half of the book put me in mind of CJ Stone’s excellent Fierce Dancing book, another example of where an account of (counter) culture was to some extent overtaken by the process itself. For those of you who are students of ‘modern’ Canterbury music, the likes of Syd Arthur, Lapis Lazuli and other of the many innovative musicians that are carrying the torch forward in such an inspired fashion, the extended sections afforded to the era from 2010 onwards allows for many references and a myriad of information regarding their activities – all good news…

Canterbury music legend (he’d hate that description!) Robert Wyatt features several times in the book, so I thought I’d better send him a copy. I was overcome with joy to hear back from him not once, but several times, expressing his gratitude and abundant enthusiasm for the book. First, this showed up via the Inamorata Press contact form:

“Watkins’ biography of Canterbury is bloody wonderful. His unique skills make this book, well, unique. And the illustrations/diagrams make it altogether stunning.”

…then, after some correspondence… 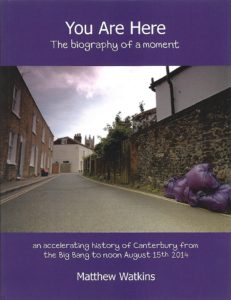 You Are Here: The Biography of a Moment – Matthew Watkins

Matthew Watkins uses this quote as an epigraph to his You Are Here: The Biography of a Moment.  On 30th December 1972 I see Bob Calvert and Hawkwind take to the stage at the Liverpool Stadium and perform their Space Ritual.  I bare my chest and dance.  Almost at the same moment, in Cambridge Massachusetts, Edward Lorenz delivers his Butterfly Effect paper to the 139th meeting of the American Association for the Advancement of Science.  On the following day two leap seconds are added to the year, making 1972 the longest in human history.  This may have very little to do with Watkins’ book, but it does help me to find a personal starting point for reviewing this satisfyingly strange volume.  He describes You Are Here as ‘an accelerating history of Canterbury from the Big Bang to 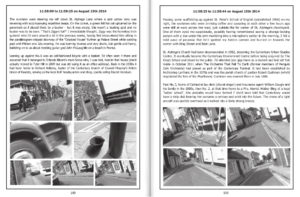 noon August 15th 2014’. It is, indeed, a book about time and place. The place is very small and specific: Canterbury in the county of Kent where Watkins currently lives and works. His temporal scope, however, is infinite: he encompasses the dawn of time right through to the (almost) present day. But what happens on 14th August 2014? The answer is small, specific and infinite, not to mention genuinely unsettling. Time is strange, we learn. It does not progress in a strictly linear fashion. Watkins is a mathematician and an exponent of the concept of retrocausality. And in his incessant patrolling of Canterbury’s streets he has seemingly joined the psychogeographic club too.  In You Are Here, with barely an equation in sight, Watkins succeeds in conjuring up the poetry of mathematics.

Matthew Watkins’ book You Are Here is, to his own acknowledgement, about many things: it starts with the physical and biological beginnings of the cosmos, but it’s really about the social and historical evolution of a Kentish city, Canterbury. How can these two be connected, you ask? Well, quite well so it seems, and Watkins has done this quite cleverly and stylishly by using lovely illustrations to take us from the big bang (13,798,000,000 to 11,000,000,000 years ago – and Watkins should know since he is a mathematician and physicist) to his first mention of Canterbury (in 800 to 230 BCE), or at least the place it was eventually to become known as. 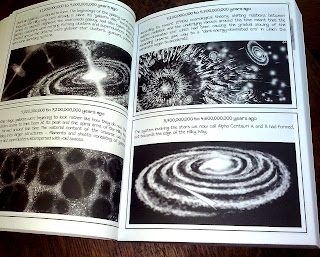 However, the book is also not just a history of Canterbury, it’s also a psychogeography of Canterbury. We can see this transition – from the accounts of social history, to Watkins own personal explorations of the city – when he starts to focus his discussion on its more urban aspect, 2004-2006. By the time we get to 2014, Watkins’ book has turned full-blown psychogeographical in his journal-type entries, which are oriented around his discoveries, made through walking the actual city itself.

A Canterbury Tale: Spiralling through time with Matthew Watkins’ You Are Here

A review of You Are Here: A Biography of a Moment is a review of time and place. We’re at Samhain as I write this, the moon is waxing gibbous and will be full three nights hence and I am in Canterbury in a tangle of streets midway between the parishes and the bells of St Dunstans and St Stephens, two of the many saints who appear in the book. Time has moved us on from the summer. Matthew’s book was launched in the summer on a very particular date. The launch was itself a part of the book. Many of the folk at the launch were characters in the book.

Or were the characters in the book present at the launch?

I have been finding ways to express my understanding of what I take to be a very beautiful – if a little scary – and certainly weird word: the imaginal. Matthew’s book is splendidly imaginal. Can I describe it? I’ll try.